Tryon Estates (Columbus, NC) recently hosted the first Tryon Estates Aviation Group gathering; 17 residents attended as well as six visitors invited from the local area. One of the visitors was a WWII P-51 pilot who flew from an air base in England escorting B-17s over Germany. He spent a lot of time chatting with resident, Sandy Groendyke, who was a B-17 pilot flying from another air base in England on similar missions. It's a small world!

There was an assortment of pilots; some who flew small airplanes for fun, and some who flew in the Army, Air Force, Navy or Marine Corps as well as some much-honored maintenance pros who kept the aircrafts flying safely. Some of the military pilots went on to fly for the airlines or as corporate pilots. One of the visitors had a piloting career with NASA, instructing astronauts how to land the Space Shuttle. Resident Kathy Windell was an Eastern Airlines DC-3 stewardess in the late ‘40s who later became a private pilot after raising her family. There was a lot of talent in attendance and it was wonderful to see everybody chatting with one another about their aviation experiences. Plans call for monthly gatherings as well as a trip to visit the Western North Carolina Air Museum in Hendersonville. 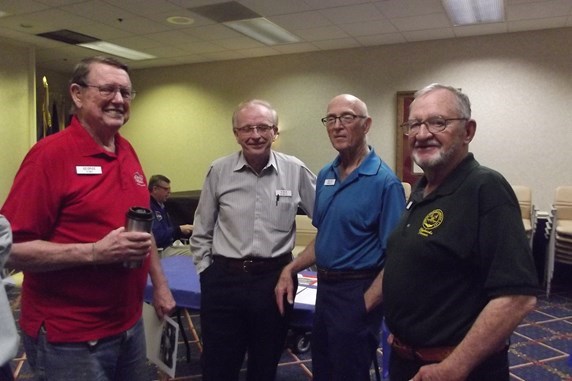