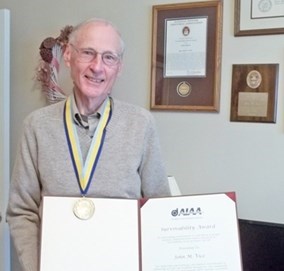 On Jan. 15, an award was given to a Polk County citizen for his involvement in aircraft survivability, technical achievements and leadership.

He is a leader in the knowledge of reducing aircraft combat vulnerability, battle damage assessment and repair of the planes.

AIAA says he has been recognized as a role model and mentor to young engineers in his field. Vice has been a member of this organization since 1969 and is now an Associate Fellow.

Vice was retired from the Air Force after more than 20 years of service. He joined the Air Force at the age of 19 in 1963. He was given the opportunity to attend college at the University of Wyoming, and graduated with a degree in aerospace engineering with honors.

Next he was sent to receive his master's degree in aerospace-mechanical engineering from the Air Force Institute of Technology in Dayton, Ohio. He served as Air Force Logistics Command's survivability program manager after graduating.

He has written 26 publications on aeronautical testing, damage and repair. Many of his earlier studies were on the F-16 Fighting Falcon and the Lockheed Martin F-22 Raptor. After his retirement, Vice attained several leadership roles in this field as manager, director and consultant of companies. Vice is now semi-retired and working with a company he helped to create in 1997, Skyward, LTD.

The company contracts with major aircraft companies and the U.S. Government, and prides itself on producing customized client solutions.

Vice and his wife, June, moved to Tryon Estates in November 2013. The couple moved to the mountains in 2002 after his wife and daughters vacationed in Asheville, N.C., and fell in love with the area.

Vice likes to hike the trails of the mountains and immediate area with his wife. He still is involved and attends the First Baptist Church of Hendersonville.

One of his greatest joys has been working with the youth in the church. The "Imagine Campaign" was his main focus. He helped them raise enough money in three years to pay off a large debt the church owed. Golf is how he spends time with the men of the church each Monday.