The secrets of 60-plus years of marriage (The Reporter)

Their reputations preceded themselves.

"We're from one of those small towns where everyone knows everyone," Joe Eisler said. "But, Joyce was two years older than me and you didn't associate with older girls."

They knew of each other, although they never met until they went on a "blind date."

Joe and Joyce Eisler, originally from Lexington, Va., recently celebrated their 60th wedding anniversary. Today, Joe, 83, and Joyce, 86, reside together in an apartment at Brittany Pointe Estates, an ACTS Retirement Community, in Lansdale.

It's a long, colorful journey of how they landed here.

The summer of 1951, when they met, Joe returned from ROTC training and spent the summer looking for fun. He and his buddies took a short trip to Virginia Beach, where the weather was overcast the entire time, causing Joe not to realize he was getting sunburnt.

The day they returned, they spent the afternoon calling girls to get a date to a party at their fraternity that night. Joe was unsuccessful, so a couple he befriended suggested Joyce.

"When I heard it was VMI cadet Joe Eisler, I was disappointed," Joyce said with a laugh. "We moved in different circles."

Then something clicked at the party and Joyce spent the evening peeling the skin off Joe's sunburnt face.

The summer was full of parties at Joe's fraternity at Virginia Military Institute, where Joe said his friends kept asking, "Where have you been hiding that girl?"

Needless to say, they were in love and married Sept. 26, 1953, at St. Patrick's Catholic Church in Lexington, Va., where both their parents were influential in raising money to build the church.

Their true adventures began after their marriage as Joe finished Naval OCS training in Little Creek, Va., and began his three years of service.

They lived in government housing apartments in Virginia, but their apartment wasn't ready when they first arrived, so an officer away on leave offered his apartment.

"We arrived late at night, and I remember turning on the light and there were cockroaches all over the floor," Joyce said.

They had their eldest son, David, in 1955, while living in those apartments. Then, after a short stint in Jacksonville, Fla., they were off to Orange, Texas.

The officers' wives had to get to Orange on their own, while their husbands traveled across the Gulf of Mexico on the ship.

"We were quite a caravan," Joyce said. "David was 6 months old, so I was nursing and changing diapers, another girl had morning sickness. When we stopped to get gas, people were very attentive and helpful."

The women arrived in Orange before their husbands so they began looking for places to live. Joyce was proud she found a little house to live in by the time Joe arrived.

"She didn't tell me until we got into bed that the little house was right next to their railroad tracks," Joe said. "The whole house shook every time the train went by."

After his naval service ended, Joe took a job with Lees Carpets. Along with their job offer, Joe was told he probably would move every three to five years.

"It's been an adventure ever since," Joyce said.

They had a routine to get quickly acquainted, which included joining the local Welcome Wagon, getting involved in a local church and attending book clubs and progressive dinners.

They proved themselves adaptable as a family and pin their success as a couple to their compromising and teamwork.

"Since I travelled all the time, I was always happy to be home and didn't want to go out," Joe said.

"He always helped out, 'I'll clean up the kitchen and you take care of the baby,' he'd say," Joyce said, "He was a wonderful father and great with the kids."

These days, Joe and Joyce like to celebrate Valentine's Day with a nice dinner at the William Penn Inn.

"We've had a whole life full of love and great memories," Joyce said. "We couldn't ask for more." 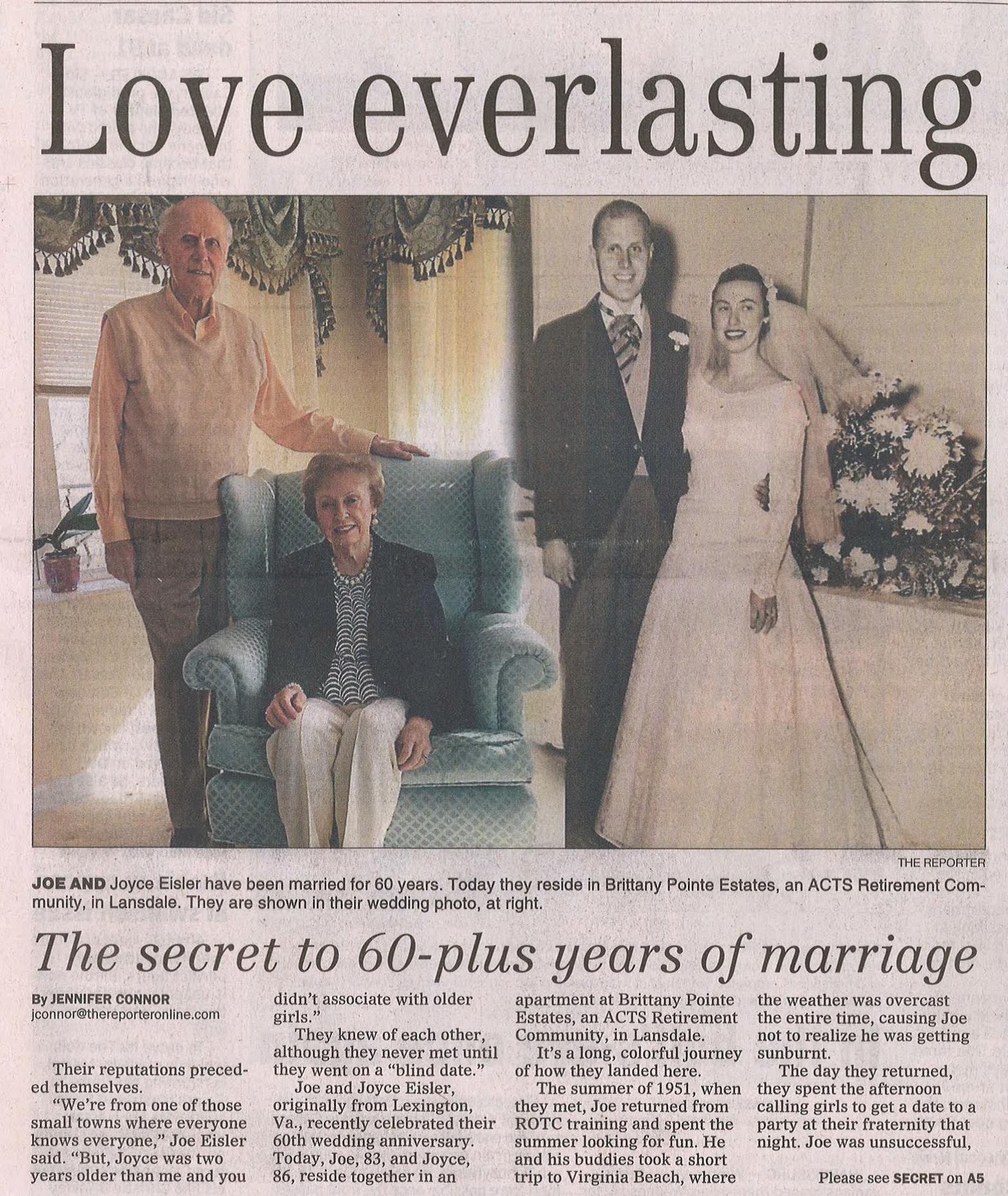