Students and Matthews Glen Team Up for 'A Million Thanks'

Students from the Covenant Day School in Matthews, NC visited Matthews Glen (Matthews, NC) for their Day of Service recently. Seven 7th graders were paired with seven of the seniors.  Their objective was to interview each other and collaborate on a letter to send to our military personnel.

Matthews Glen participates in a letter-writing campaign called, "A Million Thanks," an organization that was founded in 2004 by 15-year-old Shauna Fleming.  It started as a community service project where the goal was to send 1,000,000 letters of appreciation. Tens of thousands of letters were sent within weeks.  You can read more about this great organization at http://amillionthanks.org/aboutus.php.

The students were initially shy and tentative but excited chatter and an abundance of ideas soon filled the room. Together, the residents and students formed lovely letters. It was a wonderful morning and the students have promised to return! 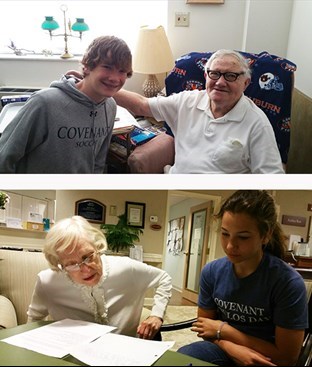