On June 6, 1944, Allied forces landed on the beaches of Normandy, an invasion that would eventually lead to victory in the war. Thousands of men were killed in the invasion, and of those that survived, few remain alive today. One of those survivors, Joe Beyer, now lives in Spring House Estates, an ACTS Retirement-Life Community in Lower Gwynedd. 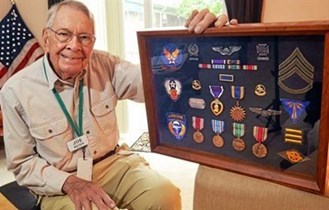 Beyer, now in his 90s, first registered for military service in 1942. He served as a radio operator and mechanic in the United States Army Air Corps and achieved the rank of staff sergeant. As radio operator, he rode behind the pilots on the right-hand side of the plane. He flew in a Douglas C-47D Skytrain, known as a C-47.

In a C-47, there is a small window on the left-hand side of the plane for the navigator. "I cajoled the metalworking guys to give me a window on the right-hand side," Beyer said. His was the only C-47 in the world to have a window for the radio operator.

D-Day was originally scheduled for June 5, Beyer said, but the invasion had to be rescheduled due to poor weather conditions. Six hours before the invasion, around midnight on June 6, Beyer's plane dropped paratroopers into Normandy. "Everybody was resigned," he said. "We were scared as hell."

Everyone was quiet, and all you could hear was the sound of the engine. "You could see the nervousness," Beyer said. "Guys were smoking cigarettes."

When Beyer's squadron retired to England, there were some bullet holes in the plane but no one was injured. Although he was only 21 years old, Beyer was the second oldest person on the plane; the pilot was 25 and the co-pilot was 20. "We were all young people," he said.

Mid-morning, Beyer and his squadron returned to tow glider planes into France. It was a little foggy by that time, he said, and there were "boats all over the place, as far as you could see."

Following D-Day, Beyer's plane evacuated some of the wounded soldiers back to England. He also spent time resupplying General George Patton's missions, and in June of 1945 evacuated prisoners of war from prisons and concentration camps in Germany.

He was honorably discharged in September 1945 and got married a few months later. After living in Colmar for 60 years, Beyer moved to Lower Gwynedd last year. Seventy years after D-Day, he continues to fly glider planes on the weekends. "Here's the ironic part," Beyer said. "Now I fly a German-built glider for pleasure." 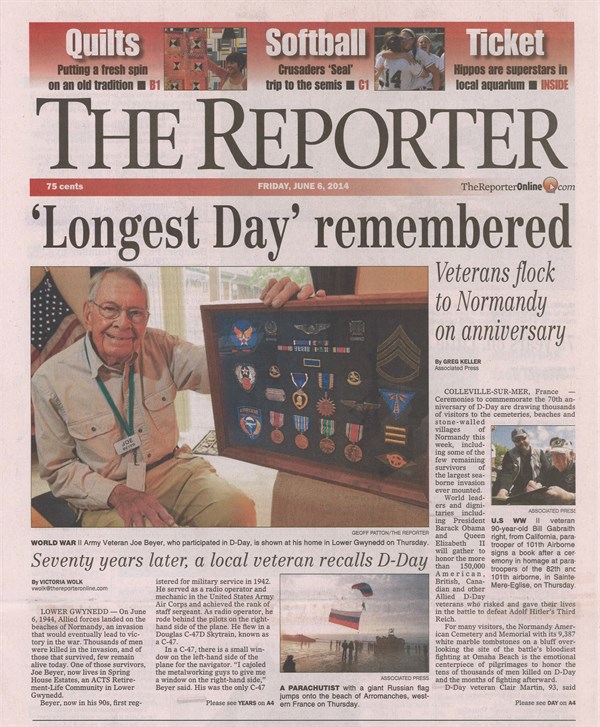