Recalling D-Day: 'The high ground was won' (The Intelligencer) 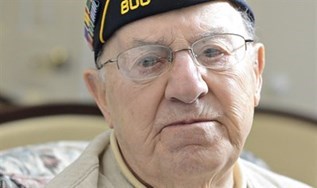 He saw them fall - seeing so many men die so fast that the vision still haunts him 70 years later.

First came the drownings. Troops, doomed by the overloaded packs on their backs, plunged into too-deep water as they stepped from their ships' landing ramps off Omaha Beach in Normandy, France.

"Those poor guys never had a chance," said Peter Rossetti, an Upper Southampton resident who served as a Navy quartermaster. "Some of our soldiers never even hit the beach. They just went down; they drowned."]

Then, from the cliffs above, German gunners shot thousands of the Americans who made it to land on Omaha Beach.

"As the men hit the beach, we could see them falling down," Rossetti added. "They were killed by enemy fire; that stayed in my mind and it still stays today. We lost a lot of men in one day."

The passing of years has lessened the flashbacks that used to jolt him from bed at night, but retelling the story doesn't soften the horror of D-Day all these years later.

Friday marks the anniversary of the pivotal World War II invasion, when 160,000 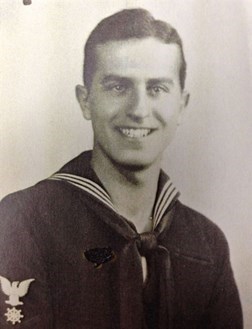 Allied soldiers - mostly from the United States, Canada and Britain - landed in Normandy to launch the mission to break the German occupation of Europe.

John Rossi, La Salle University professor emeritus of history, said the Allies landed on five beaches: the U.S. on two (Omaha and Utah) and the British and Canadians on the other three (Gold, Juno and Sword).

"At Omaha, just about everything went wrong," he said. "The naval bombardment wasn't long enough, the men were landed too far offshore, and the German troops they faced were the best that any of the Allies faced that day," he said. "It took most of the day to get a foothold and the cost was higher than on any other beach - about 2,500 casualties."

"What makes Omaha important is the extent of the losses, so high, in fact, that the American commander, Gen. Bradley, seriously thought of withdrawing his forces at one point," he said. "If that had happened, there would not have been a coherent link among the five beaches and the Germans might have been able to exploit that gap between Utah (Beach) and the British and Canadian beaches farther east."

"It came close to being a failure," he said. "If that had been the case, there would have been a wide gap between the three landing beaches to the east."

Villanova University history professor Marc Gallicchio said the Normandy invasion was planned with multiple landings on different beaches so that if one failed, it would not automatically ruin the operation's overall chances for success, but it would have made it even more difficult. And, he added, the capture of the port of Cherbourg, which was to the west and north of Utah Beach, would have become more difficult. 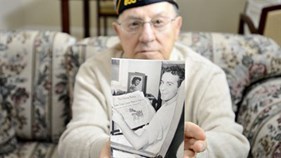 "The Allies needed Cherbourg to bring in the supplies they needed to stage the breakout from Normandy and launch the offensive into France," he said. "The loss of Omaha Beach would have left the buildup unbalanced and would have resulted in more Allied casualties and constricted the flow of supplies into the area of operations, making subsequent operations and the eventual breakout much more difficult and costly in lives."

The 91-year-old Rossetti saw the battle unfold from his post on a landing ship tank, known in the military as an LST. It carried tanks, jeeps and small boats to shore. Rossetti was responsible for plotting the course for his crew.

"We were very frightened," Rossetti said. "We didn't know what to expect. We were told by radio message to stand by. We may have to evacuate infantry men from the beach. We felt if we have to go to Omaha Beach, we are going to be targets, too. That was very scary."

When his ship did arrive, it joined thousands of other vessels massed in the ocean off Normandy. "To see all those ships at one time, we knew we were in something really big to save Europe from the Nazi occupation," he said.

"We were all afraid because ... we were all being shelled by the German artillery," Rossetti added. "When you see the shell drop by the side of the ship, and the water comes up, you know that was a close one, and you start praying.

"It will be on my mind many, many times," he said. "Sometimes, I have flashbacks, but they're not as frequent as they used to be. I thank the good Lord I'm here to talk about it.

"When we got there, you could see the Americans got the short stick," said Rossetti, adding that of the five landing targets, Omaha Beach faced the toughest battle in Normandy. "You see, the Germans were firing from up on a plateau. Our boys had to try to overcome that. We lost (thousands) of men on D-Day because of that advantage. They were picking them off like chickens in a shooting range. We had to stand by on the ships in case the infantry boys didn't break through."

He said the Germans were firing on American soldiers from trenches shrouded in tall grass and from concrete "pillbox" bunkers atop cliffs off Omaha Beach.

"We were at a disadvantage; we were really taking a beating," Rossetti said. But on the day of the largest seaborne invasion in history, he recalled with satisfaction, "the high ground was won."

"It was very emotional, and thank God those guys (U.S. soldiers) made it up there to knock those 'pillboxes' down and advance," he said. "We felt a sigh of relief - though we paid a high cost."

By nightfall on June 6, more than 9,000 Allied soldiers were dead or wounded, but the more than 130,000 who had made it ashore were moving on to secure French coastal villages.

In his time in the Navy, Rossetti served in North Africa and in Sicily, Salerno and Anzio, all in Italy. But it was the Normandy campaign that left the deepest impression.

Despite not being injured on D-Day, he didn't emerge from his time in Normandy unscathed. While heading back to England to retrieve supplies, the landing ship Rossetti was on, the USS LST-359, hit an underwater mine on July 12, 1944.

"I remember being blasted in the air," he said. "When I regained consciousness, the captain and the officer on deck … I thought they were killed. They were just laying there. I got up to go assist them, but I collapsed. I realized my left knee was bleeding and I had been wounded. My knee was shattered.

"Out of nowhere, a British hospital ship was there, evacuating the wounded," he said. "I was transferred to the U.S. in a full-body cast."

Rossetti spent the next eight months in naval hospitals, recovering from operations on his leg.

"When I was able to walk on crutches, I received a Purple Heart," he said.

While he was recovering, he got the news that his brother, a staff sergeant in the 83rd Infantry Division, had died in the Battle of the Bulge.

"I lost my kid brother two months after his 21st birthday - that was rough on me, my mother and father," Rossetti said, his eyes filling with tears. "That was very hard to take because he was the youngest of the family. And here I was, wounded, but fortunately, I made it. I wish Joe had made it, also, but that is the way things are."

Rossetti said he took pride in being an American during his five military campaigns, and he hopes people learning about the sacrifices made on D-Day will honor that time in history. "We, the people here in the U.S., live in the greatest country in the world," he said. "Inform yourselves to what's going on in our country today without politicizing it. Become educated today and stand up for America.

"Let us not have anyone change our ideas or how we live," Rossetti added from his home at Southampton Estates. "I'm proud to be an American. I say God bless America and the United States. Let us continue the be the great country, hopefully, that we are." 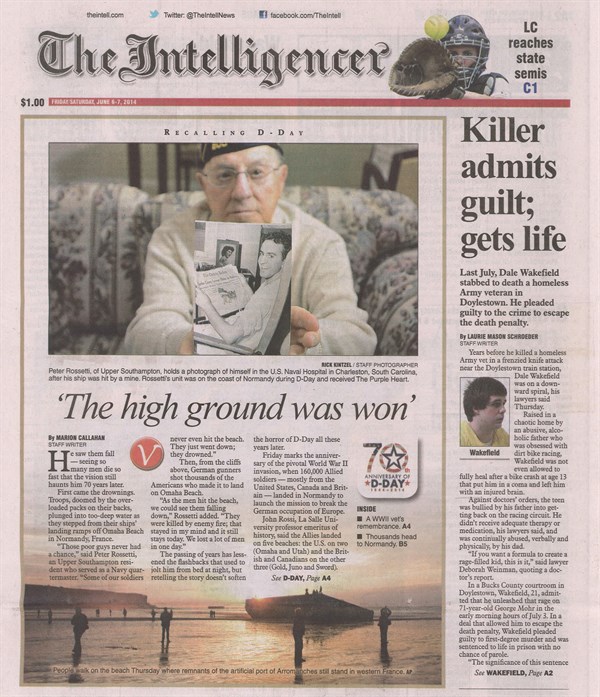