Residents of Matthews Glen in Matthews joined seniors across the country and participated in National Senior League's Wii Bowling Program to raise funds to support Alzheimer and Dementia research. A room full of residents cheered on over a dozen bowlers who had a "ball" as they played for the majority of the day. In 2013, over 1,200 seniors bowled and raised a total of $6,500. The Matthews Glen team collected $515 and exceeded last year's number of strikes by 10 for a total of 144! 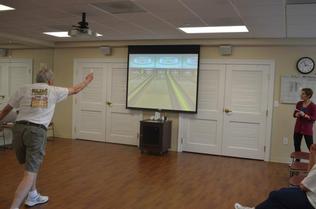