Pilot safety: How the road to better training was paved (Pensacola News Journal) 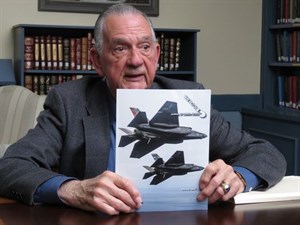 The dawn of naval aviation was a time of trial and error, and it was the failures that paved the way to better aviation innovations and training.

Furlong started his Navy career at just 17 years old in 1948. It only took him nine months to get his wings, and while pilots today usually train on two aircraft, Furlong flew six different aircraft within that short period.

"Planes are much safer now than they were back then," Furlong said. "The accident rate back then was tremendous."

In 1954 alone, the Navy and Marine Corps accident rate was 776 aircraft and 535 aviators, according to a 2011 article written by retired Vice Adm. Robert Dunn in The Naval War College Review.

In 2000, the number of major military accidents sat at 57, according to abcnews.go.com.

"If we weren't involved in a mishap back then, we saw a lot of unusual things happen," Furlong said. "Planes just weren't as aerodynamically sound as they are today."

"But now, kids are better qualified and more educated."

Furlong was never in any accidents himself, but he seemed to always be around when they happened.

Furlong remembers an operational accident that happened when he and his fellow pilot, "Cheeks" Weeks, got orders to California as "replacement pilots." As it turned out, the Pacific fleet squadron VA-156 had lost seven airplanes and five pilots due to operational accidents.

During one specific mission, three aircraft belonging to Furlong, Weeks and their fellow pilot John Parish, were being loaded onto the USS Lexington in San Diego. The crew had never seen an F-11 and the pilots had never seen a carrier.

While out at sea the three pilots received their next assignment to the Taiwan Strait, so they were catapulted from the carrier and on their way back to Miramar in San Diego to prepare for their assignment.

Somehow, Parish's plane caught fire and he had to eject.

Furlong remembers following the flaming aircraft and seeing a young mother below, holding her baby, faint as the aircraft grazed her picket fence and crashed into the nearby canyon below.

He also remembers how Weeks followed Parish and watched him float to earth, landing in the middle of a major highway, unscathed, due to the direction of a good Samaritan below who happened to be a parachute rigger driving down the highway in his convertible.

Furlong admitted he and his fellow pilots were young, green and didn't have as much experience then as young pilots do now.

"Training is superb now," he said. "When kids come out of flight school, they know what they're doing. And simulation, something we didn't have back then, plays a big part in it. It's as close to the real thing as you can get."