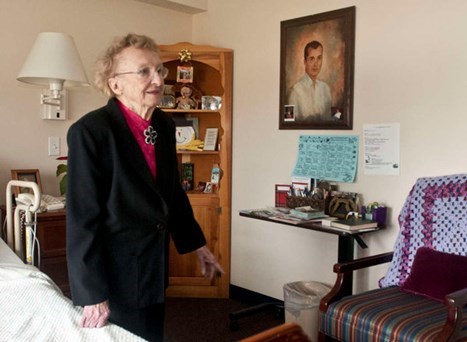 Peggy Philp, 86, never even considered living in a nursing home when she was younger, but, after surviving breast cancer and a "slight" heart attack, she found she needed one.

She also found it much homier than many her age expect.

At WillowBrooke Court in Fort Washington, she got to bring the figurines she has collected and the portrait she painted of her late husband, who died in 1983. In the picture on her wall, he is a young man with soulful brown eyes. "As long as I live, he will not die," she says.

She gets up when she wants and chooses what she eats. She takes whirlpool baths in a "spa" with heated towels. She still does the "prayer walks" she began while in independent living at adjoining Fort Washington Estates, another part of the continuing-care community run by ACTS Retirement-Life Communities. There are birthday parties each month and lots of activities.

This model of reform, known broadly as "culture change," has been building for more than 25 years. It remains rare, in part because of tight funding, old buildings, a lack of incentives, and resistant staff, but it is gaining.

Whether these changes lead to better medical outcomes is an open question, but experts said there was evidence that they foster better satisfaction for residents and families and less turnover - a notorious industry problem - among staff. Some providers also report better resident behavior, which reduces the need for psychotropic medicines and physical restraints. Residents also may be more likely to maintain their weight.

Sheryl Zimmerman, a University of North Carolina researcher, said the goals of the changes were not primarily medical. "It's not just quality of care. It's quality of life."

The United States has 16,100 nursing homes. Residents, many of whom have dementia, stay an average of 836 days. Medicaid pays close to $78,500 a year per person while private-pay customers spend more, one local nursing-home operator said. Culture-change advocates say that building renovations are expensive but that other costs are similar. When the staff knows patients better, they say, they notice small changes and head off emergencies.

West Point, Pa.-based ACTS, which manages 23 communities in eight states, has embraced culture change in all its homes. Three ACTS homes, including WillowBrooke, are now in a study evaluating the impact of assigning the same nursing assistants to residents, having small staff meetings in the hall, and giving residents choices.

More individualized care has been a goal since the late 1980s. The Pioneer Network began advocating for culture change in long-term care in 1997. The Green House model, a radical change that got financial backing from the Robert Wood Johnson Foundation, was introduced in 2003. It calls for houses with up to 12 residents who are cared for by all-purpose workers who cook, clean, and help with daily activities. There are now 153 Green House homes (none in Philadelphia) and an additional 120 under development. That's up from 100 in 2011.

Operators such as ACTS say they were inspired by Green House but prefer to go their own way. Their "neighborhoods" often have about 20 residents. Some include nursing assistants in care planning, but maintain separate food and cleaning staffs.

What defines culture change can be squishy, but advocates say it's more about relationships and resident and staff empowerment than buildings.

"I can tell as soon as I walk into a nursing home," said Peggy Sinnott, Kendal's director for health services. "If there's visiting hours, it's not culture change. If you can't have a birthday party for your mother, there's no culture change."

She said a woman moving into a Kendal home in Chicago was near tears from fatigue and couldn't face getting up at 7 for breakfast. She slept till 9:30 the next morning, as she has ever since. "That little thing," Sinnott said, "makes all the difference in that lady's life."

Peggy Brenner, ACTS's regional nursing director, said a nursing assistant told her she understood culture change when she went to shower a man whose longtime roommate had died during the night. The man was distraught. The aide sat and talked. The shower could wait. "The old culture," Brenner said, "would have been to give him a shower at 8 o'clock. Forget about his feelings."

Genesis' Adding Life to Years program reminds staff of the long life before the nursing home. "Instead of Mrs. Smith in Room A with congestive heart failure," said Carol Rohrbach, vice president of sales, the staff sees "a teacher who raised four sons and maybe went to 1,000 basketball games."

Genesis now vows that no one will die alone. If there's no family, the staff keeps vigil. In the past, when people died, they were quickly taken out the back door and no one talked about it. Now, they're draped with a special quilt and wheeled out the front door.

WillowBrooke displays on a special table portraits of residents who die.

Christine Malone, a nursing assistant at WillowBrooke, said she cries her eyes out when her patients die. "It really sucks." But she was also touched when a family asked her to be a pallbearer. "It's kind of like, 'Hey, I am appreciated.' "

It drove home the value of making cookies with the residents and listening to them talk about their lives as she works with them.