In the back of a C-47 transport plane, heavily armed paratroopers steeled themselves for battle. Some blackened their faces; others puffed cigarettes. All carried machine guns, carbines, ammunition, and hand grenades.

"I was excited, nervous, and scared as hell," said Joe Beyer, the plane's radio operator, recalling that early morning flight across the English Channel to Nazi-occupied France.

Below him, at the helm of Navy LST 359, sailor Peter Rossetti headed for the Normandy beaches with 180 Canadian soldiers, six small landing craft, two tanks, and more than a dozen jeeps.

"We knew this was the big invasion and we had to be successful," said Rossetti, who soon watched, through binoculars, American troops being mowed down by enemy fire on nearby Omaha Beach.

Army medic Bernie Friedenberg was there, witnessing unimaginable carnage: comrades with horrible, gaping wounds, some with arms and legs blown off, and bodies buffeted by waves dyed red with blood. "It was a massacre, and I was right in the middle of it," he said.

Eisenhower had told them and fellow service members that "the eyes of the world are upon you. The hopes and prayers of liberty-loving people everywhere march with you."

Looking back on that day, the local veterans wondered how they ever made it home in one piece to raise families and live into their 90s.

"The Lord has been good to me," Beyer said. "I sometimes wonder whether there will be anything left for me in the hereafter if I've gotten everything here."

History looks on June 6, 1944, as the beginning of the end for the Third Reich.

"We lost one plane from our group, but the crew was picked up by the French underground and later returned to the squadron," he said. "We had some bullet holes in our ship, but they were easily patched."

Below was a massive armada of more than 4,000 ships heading to Normandy. "You couldn't help but be awed," Beyer said.

In a flat-bottomed LST (Landing Ship, Tank), Rossetti and others bounced around in the choppy channel waters, taking troops and equipment to the part of the Normandy beaches designated "Gold."

"When daylight came, we were all tense; I never prayed so much in all my life," Rossetti said. "We knew we could be wiped out."

At Gold Beach, "there was almost no resistance in the beginning," he said. "I steered the ship right up on the beach. Then all hell broke loose."

On the adjacent Omaha Beach, "we were taking a shellacking," Rossetti said. "I could see [American troops] shot down and drowning in the water with their heavy backpacks.

"They didn't have a chance, and we were ordered to stand by in case we had to rescue them," he said. "It would have been like Dunkirk," where British, French, and Belgian troops were cut off by German forces, then evacuated, early in the war.

On the beach, Friedenberg was "under heavy fire," he said. "I saw a lot of dead bodies and wounded men and went right to work, patching up guys, going one to another.

"There were an awful lot of casualties," he said. "I was too busy to be scared."

Bullets kicked up the sand and pinged off metal. The wounded cried out for help.

"It was a pretty rough situation," Friedenberg said. "People don't know how close we came to being pushed off the beach."

The Germans "were on the high ground looking over the landing area," he said. "It was as bad as it could get."

Half his platoon was killed or wounded in the first 20 minutes.

The beach "was covered with blood," said Arthur Seltzer, 90, a former Army communications specialist who lives in Cherry Hill. "Bodies were all around. . . .

"We had a bitch of a time on that beach," he said. "There were 36 on my landing craft, and only two of us survived."

"You couldn't dig a foxhole in wet sand. You could only hide behind a soldier who was dead."

Eventually, the German fire was silenced, and pinned-down U.S. forces began moving off the beaches.

Beyer went on to fly glider-tow missions into France and was wounded in the head by flak on Sept. 20, 1944, during Operation Market Garden, the largest airborne operation up to that time.

After the war, Beyer married, had three daughters and a son, and worked as a mechanical engineer until retiring in 2000. A resident of the Spring House Estates retirement community, he realized a long-held dream at age 84: flying his own aircraft as a licensed glider pilot.

Rossetti was seriously injured the month after the invasion, when his ship hit an acoustic mine. He recuperated at the Philadelphia Naval Hospital.

Rossetti married, had four daughters and a son, and worked as an employee benefits consultant in Philadelphia, retiring in 2006 and living in the Southampton Estates retirement community.

Friedenberg "came through [D-Day] without a scratch, and that was nothing short of miraculous," he said. "I was lucky, lucky indeed.

"I didn't expect to live this long," he said. He was wounded in the head and back by shrapnel in post-D-Day fighting. "I didn't know if I'd get through the war."

At home, Friedenberg married, had two sons and a daughter, and owned a tavern and hotel, a motel, and Boardwalk video game businesses. He also has spoken to high school classes about the war, and written a book about his experiences.

Seltzer, an Olney High School graduate, returned to his parents' Olney home in January 1946 and later graduated from Temple University.

He married, had two daughters and a son, and retired as executive vice president of a Philadelphia electronic component parts distributor.

Four years ago, Seltzer returned to England and was taking the ferry to France for a tour of the beach where he landed.

"The guide told us to stay in our seats so our passports could be stamped," he said. "I told him, 'Nobody stamped my passport the last time I was here.' " 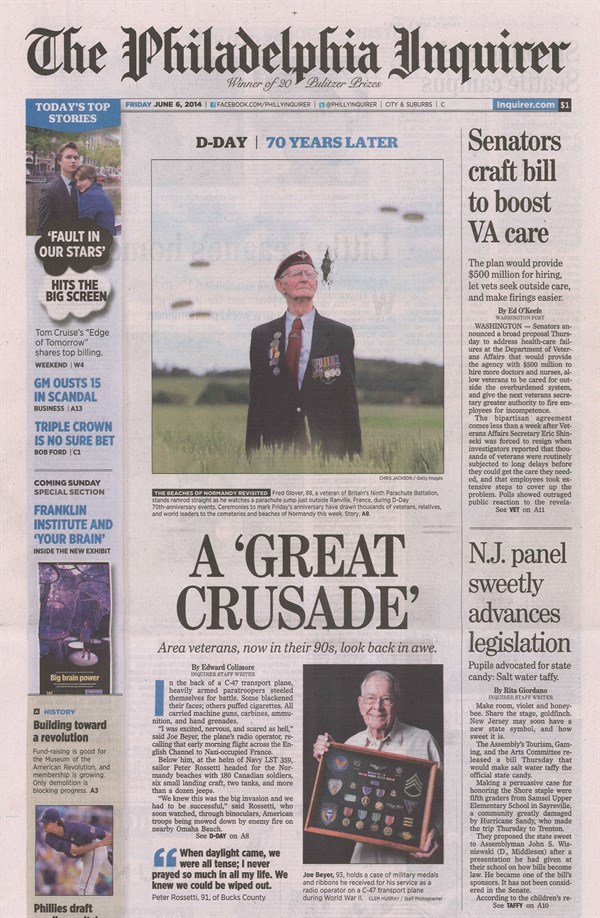