Lansdale man honored with France's Legion of Honor (The Reporter) 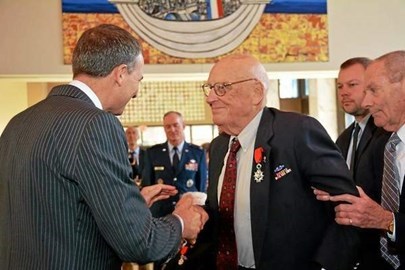 Seventy years later, Deardorff, a resident at Lansdale's Brittany Pointe Estates, an ACTS Retirement-Life Community, was honored at the French Embassy in Washington, D.C. for his personal contribution to the liberation of the country during World War II with the French Legion of Honor.

"They don't give out this medal to too many people - you have to be living," Deardorff, now age 92, said. "I am very pleased with the recognition."

Thirteen others were honored along with Deardorff on March 26, 2014 at a special ceremony at the embassy. Deardorff said he first heard about possibly being recognized with the Legion of Honor via a Brittany Pointe Estates newsletter, encouraging veterans to seek the recognition they deserved. After a process that generally takes two and a half years, Deardorff received a letter from the French Embassy informing him that we would be recognized.

Deardorff fought in the legendary Battle of the Bulge on Jan. 15, 1945, outside the town of Grande Halleux, Belgium. His outfit, the 2nd Battalion, 291st Infantry Regiment, 75th Division, relieved the 2nd Airborne Division and attacked the enemy, as they were "pinned down all day and night in an open field covered with over 18 inches of snow in 8 degree weather."

In addition to his contribution to the Battle of the Bulge, Deardorff was honored for his unit's efforts, along with the French 5th Armoured Division, when they led an attack in the "Colmar Pocket" in France, outside of the town of Wolfgantzen.

The battle lasted until Feb. 6 and Deardorff suffered a concussion from an incoming shell as well as frozen feet. He was put in a hospital in Paris, then was flown to England to recuperate. In 1945, Deardorff was honorably discharged from the Army, going on to be recognized numerous times for his service.

After his service ended in 1947, Deardorff went to work at Lees Carpets, eventually becoming the Controller and Executive Vice President of Finance and Administration of Carpet Divisions of Burlington Industries after it merged with Lees Carpets.

"Though it happened many years ago, it's thrilling to be reminded that our efforts are not forgotten," Deardorff said.