Some West Point Alumni at Lanier Village Estates and their spouses have created an annual tradition of celebrating the founding of the distinguished United States Military Academy. This year, the group gathered in the dining room to toast the corps' 212th anniversary. The men brought memorabilia of their military days including a lap blanket used as a hanging backdrop, tar bucket hat, a bugle and yearbooks. All of the gentlemen in attendance joined the military after graduation; four selected the Army and one chose the Air Force. 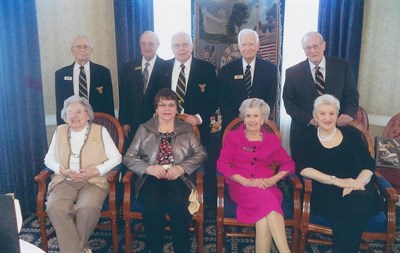