Lanier Village Estates has been raising money this month for the Hall County firefighters who were injured in a training accident last month - the effort sparked by the fact that it was Lanier Village that urged the county to purchase the truck involved in the accident.

LVE resident Augie DeAugustinis who took the lead in lobbying for the vehicle, which would have been based at a fire station near the retirement community north of Gainesville, said "we (felt) a special responsibility to step up and help out with their expenses."

The firemen were injured July 22 at the Gainesville/Hall County Joint Training Facility.

"They were extended up in the ladder truck, the bucket truck," Hall County Fire Marshal Scott Cagle explained at the time. "While they were in the bucket some type of mechanical failure happened and the ladder pancaked down onto itself; it free-fell about twenty feet before it stopped itself." The distance they fell was later updated to 44 feet.

County Administrator Randy Knighton told AccessNorthGa.com Monday that Will Griffin remains under treatment at Shepherd Spinal Center in Atlanta. T.J. Elliott and Stephen Jackson were released after treatment at Grady Hospital in Atlanta, but continue to undergo physical therapy, according to social media posts.

The investigation into what caused the accident is continuing, according to Hall County spokeswoman Katie Crumley, and the manufacturer of the truck has taken all of those models out of service.

"I would like to mention that we're working on incorporating the fundraising efforts for these firefighters into our Laurel Summer Fest," Crumley added. That event is planned for Aug. 30-31 at Laurel Park.

"The whole issue behind the ladder truck started here at Lanier Village Estates," DeAugustinis explained. "With the closing of Fire Station 3, which had been the primary responder for LVE, and the announcement of the new Station 16, we began following the progress of the new station very closely. Obviously, the EMTs from Station 3 were frequent visitors out here."

He said that during a phone conversation with a representative of the fire department, he learned that Station 16 was being constructed with three bays, including one to accommodate a ladder truck.

"When I inquired if a ladder truck would be stationed there, I was informed that the county only owned one ladder truck and it was based in Flowery Branch, at least 20 minutes away (from Lanier Village Estates). The backup plan was to use the ladder truck owned by Gainesville, which was only 10 to 15 minutes away. Keep in mind, LVE's main building is six stories tall. After some additional inquiries, I discovered that a county our size should have several ladder trucks for the optimum fire rating, but certainly, at least one more."

DeAugustinis said it was then that he contacted Hall County Commission Chairman Dick Mecum to make him aware of "our concern of not having a ladder truck in close proximity, especially since the new Station 16 would be able to house one."

He said Mecum looked into the issue and that started the whole process that resulted in the search for an additional ladder truck. After the county took delivery of the vehicle, DeAugustinis added, the Station 16 crew brought it out to Lanier Village to show it off. 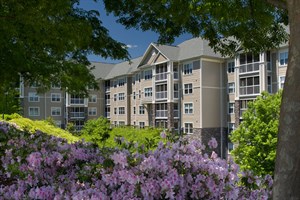