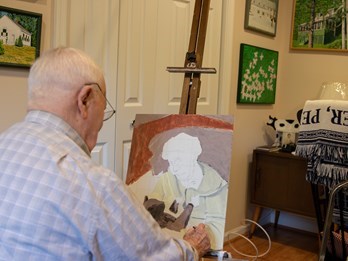 Gwynedd Estates resident and artist, Frank Boni, was interviewed by The Ambler Gazette about his completion of a 30-year project that included a series of paintings depicting churches and other buildings from the Philadelphia suburb of Ambler. The article marks the second time - the first coming in 1988 - that Mr. Boni has been interviewed by the newspaper about the project.

Mr. Boni, 92, was also recently the subject of one of our Featured Resident profiles, which you can read here.

To ready The Ambler Gazette's latest article, click on the image or link below.

"I think I like the ... well, I like them all," said 92-year-old Frank Boni. When it comes to his paintings, Boni does not pick favorites - "They're like my children." What first started as a painting of Boni's own church, the First Presbyterian Church of Ambler, 30 years later turned has grown into a group of roughly 15 acrylic works titled "Churches and Synagogues in the Ambler Area."