How many 91-year-olds are still active in a garden club? The Spade & Trowel Garden Club of Seaford boasts two such members, both named Betty.

Both Betty Daudt and Betty Gast were honored recently with the "Perennial Bloom Award," designating them as members who have made the club grow and bloom with their continuous support. Rain precluded a planting ceremony on Sept. 25 at Manor House in Seaford, but could not dampen the spirits of some 25 club members and dozens of Manor House residents who gathered for a reception in honor of the two ladies.

A camellia was added the next day to Daudt's collection on the Manor House grounds and hydrangea was planted in Gast's honor.

For more than 40 years, Daudt has been an active club member. She was a member of one of 10 garden clubs in Aiken, S.C., for 10 years before that. Not long after moving to Seaford, she became a Nationally Accredited Flower Show Judge.

Daudt has been active on committees and has entered and won ribbons in several flower shows. She served as president of The Spade & Trowel Club from 1982 to 1984. In 2013, she shared her floral design skills with The Spade & Trowel Kids Garden Club, which meets at the Western Sussex Boys & Girls Club. She has also worked with patients closer to her age at Lofland Park.

For the last 42 years, Daudt has also been an accredited Camellia Flower Judge of the American Camellia Society. She and her late husband, Louis, belonged to camellia clubs in Baltimore and Washington, D.C.

At the reception, Anne Spicer described how she had been called upon to decorate the Manor House decades ago and has shared the bounty of her garden with residents there ever since.

Daudt is always cheerful and willing to lend a helping hand. She has been a perennial asset to The Spade & Trowel Garden Club.

Betty Gast has been a member almost since the club started. Her name and photographs are found throughout the club's scrapbooks - cutting greens for the annual Greens Sale, decorating Ross Mansion, being inaugurated as an officer, landscaping the Post Office downtown (way before it became a museum!) She has won numerous ribbons in flower shows and served on many committees, most recently the nominating committee.

Betty has encouraged new members to attend and always has a smile to share. The club has been lucky to have her as a member. 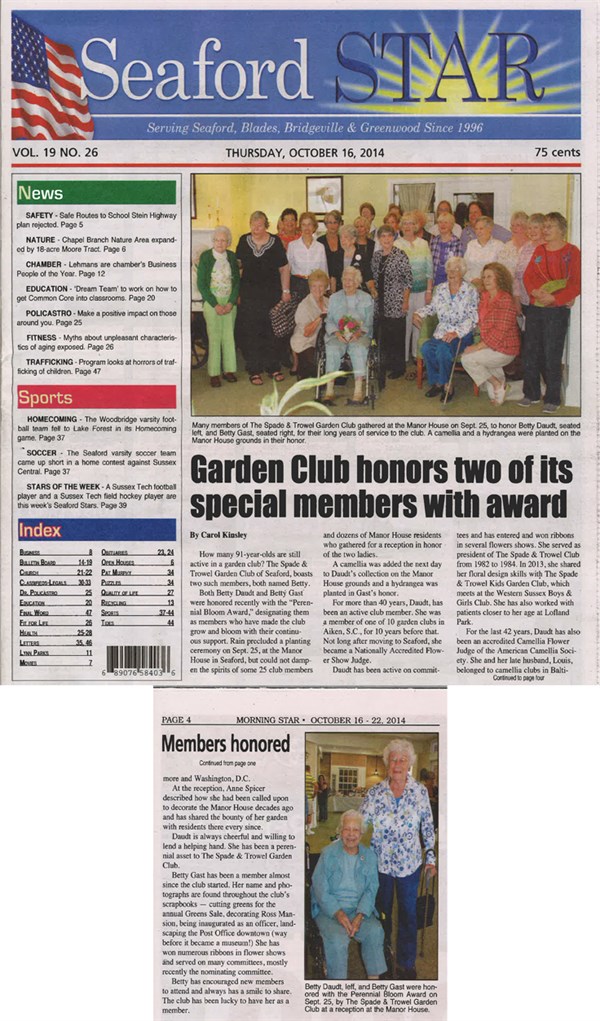