There has never been a better time to choose an Acts community. Learn Why.

Army veteran Curtis Deardorff, 92, of Lansdale, and Navy vet James McKelvey, 89, of Aston, both traveled to Washington to receive the French Legion of Honor medal on March 26.

They were joined at the French embassy by 11 other vets and the family of another who had passed away.

The highest honor bestowed by France, the distinction has been given to hundreds of U.S. veterans who fought for the liberation of a country under German occupation in at least one of the four main World War II French campaigns: Normandy, Provence, Ardennes, and Northern France.

Deardorff said he applied for the medal, but McKelvey said he was surprised.

"They called, and I thought someone was kidding," McKelvey's wife, Dot, said of the phone call they received from the French consul general.

Both Deardorff and McKelvey joined the war in 1943. McKelvey's naval service took him first to Brazil, where his ship, the Nitro, supplied ammunition and sailed, he said, through the "sub-infested Atlantic." 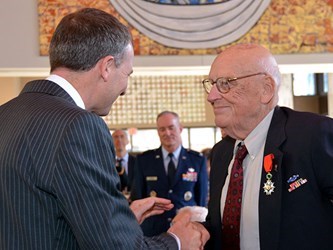 "My husband said he saw so many sunken masts in that area," Dot McKelvey said.

McKelvey went on to England and then headed for France by crossing the English Channel on the USS Melville in June 1944. His job on the ship, he said, was to fire a deck gun for protection while his shipmates repaired other boats, rescued the injured, and collected the dead.

One time, McKelvey's ship was attacked by a German plane, and he said he can still recall seeing the pilot's face.

Like McKelvey, Deardorff crossed the English Channel, and his outfit arrived in Le Havre, France, nearly six months after D-Day. He marched on to Belgium and spent Christmas there in his first battle.

A month later, Deardorff and his platoon were asked to provide cover from a hill for two companies that were pinned down in an open field below. The result was 30 Americans killed and 33 wounded, Deardorff said.

"We just got butchered," said Deardorff, who escaped injury in that battle.

Deardorff learned a bit later that Herzel was killed in action.

McKelvey grew up on a farm in Somerset County, east of Pittsburgh. He went to Boswell High School, then drove east on his motorcycle to West Chester with 10 cents to his name, he said. He settled in at a welding school before joining the Navy. He met Dot after the war when she was his waitress at a diner he frequented for cheese omelets and macaroni and cheese.

They never had children, but opened their home to many nieces and nephews.

"He really was great," Dot McKelvey said. "What you saw, you got."

Deardorff grew up in Lansdale, the son of an engineer. He graduated top in his class at Drexel Institute of Technology, he said, where he studied business and played varsity basketball.

After returning from the war, he and Helen Barbara Long, his high school sweetheart, who wrote to him throughout his service, were married in 1947. They had two children, then three grandchildren, then two great-grandchildren. Helen died in 1991 of ovarian cancer.

Growing up, his father didn't talk much about the war, the younger Deardorff said. "Now that he's hit the retirement years, it has become more meaningful to him."

According to the National World War II Museum in New Orleans, there are about one million World War II veterans alive. But none, museum officials said, may be left by 2036.

So, Deardorff said, being honored like he and McKelvey were last month was important to him. But he has long since lost any romantic illusions about war.

Read our Summer 2021 Edition to get the latest on Acts, its communities and residents!