To offset a global nursing shortage, a former nurse is funding a $250,000 college scholarship and inspiring students to “pay it forward” after graduation.

Kay Carpenter, of St. Andrews Estates, knew she wanted to be a nurse when she was three years old. “As a small child I was hospitalized a number of times and it turned out that nurses were some of the nicest people I met,” she said.

“There is a terrible nursing shortage now,” Kay added. “I want to encourage young women who may be discouraged because of financial problems.”

Kay worked as a nurse in the South Bay area of San Francisco. She went to nursing school in Switzerland, graduating from Ecole Le bon Secours in Geneva.

“There was only one nursing school in Geneva,” Kay said. “I asked for an interview… once I passed the language and entrance exam I was accepted.”

Throughout her career, she also returned annually to Geneva to train nurses in her specialty: hospice care. She now lives at St. Andrews Estates retirement community in Boca Raton, Florida, with her partner of 20 years, B G Carter.

The couple completed an exhaustive search to find the nursing program that would be the perfect fit.

Kay met the recipients at a luncheon and was touched by their gratefulness and affection.

“I was surprised,” Kay said. “Receiving the scholarship, none of them took it for granted that they were chosen. They were very eager to give back what they had received.”

Kay invited each recipient after graduation and stable employment "on his/her honor" to pay a portion of it forward for the benefit of future nurses.

“I think it’s incredible: we literally fund this scholarship ourselves,” said Shanice Clayton, one of the first recipients. “To pay it forward, it’s like a melting pot of love we pour back into this.”

“Immediately when I saw Kay Carpenter – you know people who are true, honest and genuine - I gave her a big hug,” Shanice beamed.

Shanice was accepted in a nurse residency program at a level one trauma center where she helps patients with brain and spinal cord injuries. She’s aiming to become a stroke-certified nurse after her father suffered two strokes.

“The specialty chose me,” Shanice explained. “It just clicked. My dad had two strokes in the past. This is a stroke unit. It literally found me. More so divine intervention I’d say.”

Shanice’s mother is also a nurse: “She matriculated through this same program. I’d like to follow in her footsteps.”

Kay Carpenter hopes her scholarship will ease the financial burden on students and help them focus on their studies.

“Some students have to work during nursing school, care for relatives and miss classes,” Kay said. “I didn’t want that to happen.”

“It’s such a blessing and a huge weight off my shoulders,” Shanice said. “I’m elated, honored and so grateful.”

“This scholarship is bigger than us,” Shanice added. “It’s not just about getting our education and getting another degree. It’s about learning so we can help people in the future.” 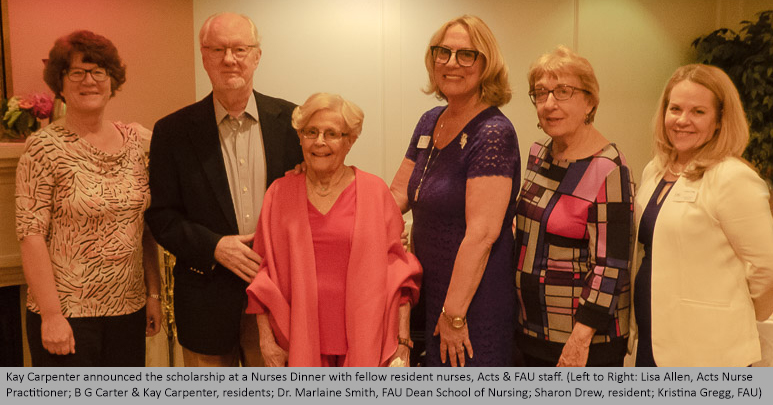 Find out how thoughtful planned giving supports the present and creates the future of Acts communities.

Giving in the Spirit of Loving Kindness

A Message from Don & Nancy Buebendorf

Hooray! We're off to play croquet!