When Ray Funkhouser’s daughter Rochelle (Shelley) was six years old the pair would amuse themselves by coming up with silly rhymes about animals.

“We batted the rhymes back and forth, and I drew the pictures,” says Ray, a resident of Gwynedd Estates in Ambler, Pennsylvania. “It was basically for our own amusement. It was just for fun.”

For more than 50 years those sheets of paper sat in storage; hard copy memories of a time when dad and daughter stretched their imaginations together.

Sadly, Shelley passed away in September 2017 and her death prompted Ray to seek out those long forgotten projects.

“They were better than I remembered,” Ray says with a laugh. Good enough to be shared with others, his wife, Judy, suggested. And so, he did. 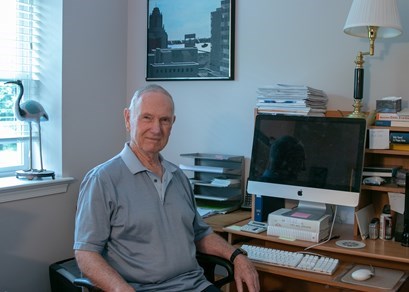 Ray, a retired communications professor with a background in publishing (we’ll get to that), got to work. He taught himself how to use Photoshop and created a mockup of his first ever children’s book, There Are, using the rhymes and drawings he and Shelley pieced together five decades before.

Next, he needed critics, and as Ray puts it, if there is one thing Acts communities have in abundance it’s retired teachers who are willing to give advice. He shared the draft with a handful of former educators at Gwynedd and it was sent back with rave reviews.

“I caught one group of them at a table working out the rhymes in the back of the book,” he says.

The book is dedicated to Ray’s two grandchildren who live outside London, England, with their mother and father – one of Ray’s two sons. He has yet to sit down with them in person to read the rhymes, but he looks forward to that day.

Ray also gave copies to a couple local libraries and his publisher put it up for sale on Amazon. He admits it has not sold a lot of copies, but he doesn’t mind.

“Doing it as a memorial to Shelley was worth it,” he says. “It’s a pleasant thing to have around and I still get amused by the drawings.”

Those old rhymes not only serve as an unbreakable link to a cherished time, but also provide a glimpse into Ray’s wit and creativity - a talent that is on full display in Ray’s other published works.

Under the nom de plume, "B. Hesse Pflingger" (let that sink in for a moment), he wrote about the astonishing life of Jake Fonko, the central figure in a series of nine spoof historical adventure novels.

While living in Singapore Ray outlined the series and wrote the first book.   Twenty years later -- 2013 -- it was e-published, fulfilling a lifelong dream. It was well-received, so he wrote the next book, and the next, and by 2018 he had e-published all nine books.  He jokes that he hopes someday to have made minimum wage for the time spent researching and writing the novels but adds that achieving the goal of being published is reward enough.

You can buy There Are on Amazon by following this link.

The Fonko novels are also available on Amazon here.  Or you can search "pflingger" on Amazon.