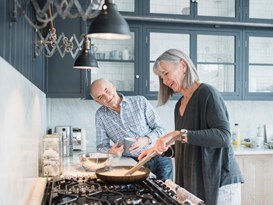 Just like any other stage in your life, retirement is what you make of it. But whether you’re planning to travel, downsize, start a new part-time career – or even if you have no plans at all - these surprising retirement facts are worth knowing about. The more you know, the more you can prepare yourself for all the changes that lie ahead.

If you’ve seen any health headlines lately, you’re probably aware that people are living longer these days. Thanks to advances in medical technology and breakthroughs in research, the current average lifespan of Americans is higher than ever. The Social Security Administration tells us that women who reach the age of 65 can expect to live to be 86.5, on average. For men, that figure is 84. And remember, those are just averages. One in three people who make it to the age of 65 will see their 90th birthday!

Also surprisingly, more than one-fifth of Baby Boomers know they’ve got longevity in their genes. When surveyed, 21 percent said they fully expected to live well into their 90’s. Ten percent were certain they’d live to see a century and beyond. With an early retirement age of 62, that’s nearly forty years of living in retirement!

Of course, being prepared for several decades of retirement living might just feel unfathomable at this point. That’s especially true since sometimes it’s hard to even plan what you’re doing next week. But just knowing that retirement can last a long time is a good first step.

2. Today’s Boomers are Coming Up Short on Retirement Savings

It’s not exactly a surprising retirement fact that today’s retirees haven’t always secured an expansive next egg. New figures confirm that the situation hasn’t improved over the past several years, despite warnings to this effect. In fact, a new survey reports that the average lifetime retirement savings of boomers today is a paltry $136,779. Compare that against the recommended savings amount of $456,000 and you can see why there’s some concern.

There are a lot of theories as to why the generation of peace and love hasn’t filled the retirement coffers. But two very distinct problems are clearly fueling the issue: boomers are still struggling to pay off debt, and they don’t tend to have much in the way of emergency funds. That same study revealed that almost one-third (31 percent) of boomers have no funds set aside for emergencies. 40 percent are still working on paying off their credit card debt.

That means when these boomers do get some cash, it typically goes toward paying down debt or starting an emergency fund, not into their retirement savings accounts.

3. Retirees are Seeking Fulfillment, Which Often Translates into Working a Job

Boomers have never been afraid of redefining each stage of life, and retirement is no exception. The surprising fact is, retiring doesn’t necessarily mean passively living out your years in leisure, as it has traditionally been viewed. Rather than fading into the background with golfing and card games, modern retirees are living active, social, fulfilling lifestyles that were rare in previous generations.

For some, that means continuing to work after they’ve retired. Everyone defines fulfillment differently but for many, it takes the form of a second career. A Merrill Lynch study debunked the myth that retirement is a time of decline by outlining the New Retirement Landscape of today’s working retirees. 80 percent of respondents in their study reported that they worked in retirement because they wanted to, as opposed to 20 percent who worked because they had to.

4. You Have a One-in-Three Chance of Living Alone

According to the Institute on Aging, nearly one third of older adults lived alone. And as you might expect, that likelihood goes up the older you get. According to that same source, almost half of women over the age of 75 live alone. That same study showed that of all older Americans over the age of 85, two-thirds of them are women. Older women are also more likely to live alone than men, according to the same source. Consider that seniors become more isolated as they age – living alone is a big reason why.

That’s not just a surprising set of retirement facts – it’s alarming as well. An AARP survey recently showed that over one-third of people over 45 consider themselves lonely. And among those respondents, being lonely was reported to be a predictor of poor health.

Bottom line: older Americans should think about the relationship between loneliness and their health and weigh these factors when they’re planning how and where they’ll live in retirement. Independent living communities allow for expansive social circles, numerous social activities, and other ways to maintain friendships and make new ones.

Here’s a stunner: 44 percent of American retirees are still paying that monthly mortgage bill each month! Not only that, but almost one-third of them have more than eight years to go! And for almost 17 percent of them, there’s possibly no payoff date in sight, ever, according to an AARP survey. To many, this will come as one of the most disheartening and surprising retirement facts on the list.

Combine that with continued maintenance, taxes, utilities, and lawn upkeep, and it’s no wonder many of today’s retirees and soon-to-be-retirees are considering downsizing or moving to independent living communities, which offer inclusive housing packages that cover these types of expenses. Today’s communities are vastly different from what you might expect if you haven’t visited one recently. Resembling resort villages more than anything, they offer older Americans a carefree lifestyle that’s social, active, and focused on helping residents fulfill all their goals for living a happy, engaging lifestyle.

Good health and finances are among the top concerns for older Americans, but lifestyle factors like being social are important, too. In fact, that same Merrill Lynch study we mentioned earlier also reported that 80 percent of seniors consider socializing to be vital to their happiness in retirement. Staying connected with friends, making new ones, doing group activities, traveling together, attending shows, taking cooking classes, moving near family - whatever “socializing” means to you, it’s likely that you’ll agree with that 80 percent: it’s essential to your well-being.

Living in a community where you can meet people who have similar interests as you is one way to combat many of the top concerns that have been revealed in this list of surprising retirement facts. Whether that means staying in your present community or moving to a new one, it may help to browse our retirement resources to find out more, With longer lifespans, more engaging ways to spend time and to interact with family, more amenity-filled living communities - retirement is changing for the better. Come see all the many ways you can be part of it!